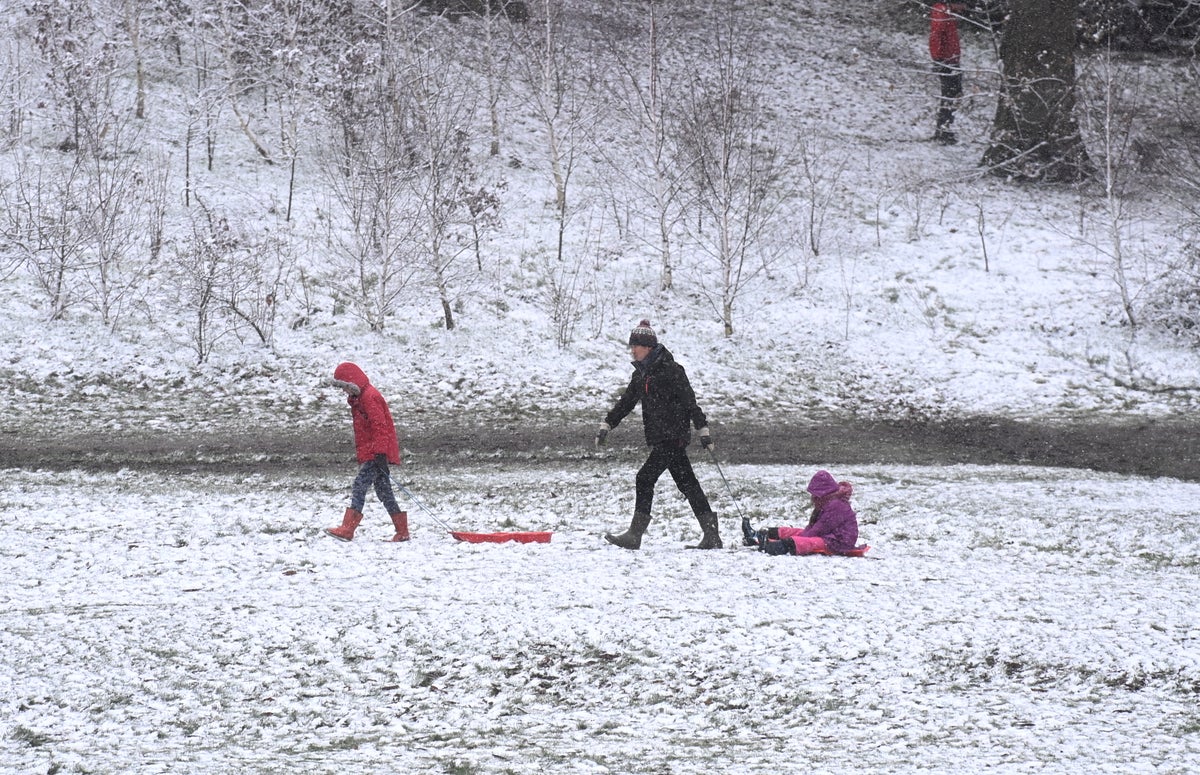 eavy snow that could cause disruption has hit parts of the country.

The east plus London and the south-east of England are covered by amber warnings of snow through to Monday lunchtime, which predict possible widespread travel disruption and possible power cuts.

Various warnings for snow and ice across eastern areas the length of Britain are in place until Wednesday.

The Met Office said Sunday started “on a wintry note in some areas, with rain turning increasingly to snow across the south-east of the UK, and snow showers feeding into the north-east.”

The winds made it feel like there were sub-zero temperatures across the country on Sunday while Monday is set to be another cold day with some places struggling to get much above freezing, the Met Office said.

The forecasters have warned of “significant disruptive snowfall” and gale-force winds in the south-east of England, with up to 30cm of snow possible in the Downs of Kent and the North Downs.

Storm Darcy is the low pressure system that is bringing heavy snow and strong winds to East Anglia and south-east England, the Met Office said.

Essex, Norfolk, Suffolk, Kent and Medway are all regions which are set to be hit by an “area of widespread, persistent and occasionally heavy snow” through to Monday, according to the amber warning.

There is also the potential for some significant accumulations across eastern parts of Norfolk, Suffolk, Essex and Kent.

“Very strong easterly winds with gusts of 40-45mph inland and 50-55mph along north-east facing coasts will also lead to drifting of lying snow.

“During Monday morning the snow will turn more intermittent before gradually easing.”

The cold snap driven by the easterly winds is not expected to be as widespread as the Beast from the East in 2018.

Met Office meteorologist Sarah Kent said: “The air will be cold but it will not be as bitingly cold as it was back in 2018.”

Glasgow City Council said it had sent its gritters on Saturday evening to outlying priority routes and areas around vaccine centres in light of the “chilly” time ahead.

It comes as many parts of Scotland and north-east England could see 2cm to 5cm of snow, with 10cm to 15cm possible in regions above 200m.

Roads may become blocked by deep snow, with the possibility of stranded vehicles and passengers.

Southeastern Rail strongly advised passengers not to attempt to travel on its network on Sunday or Monday.

It said the Maidstone East line will be closed on Monday and added: “Given the severity of the forecast some routes are closed with no replacement transport available.”

Southern Railway said it had cancelled trains on two of its routes.

Recent rainy weather on unstable rocks have triggered a series of cliff falls this weekend prompting the coastguard to warn people to stay away from some seaside areas.

Cliff falls were also reported at Aycliffe, Kent, in Scatby, Norfolk, and there was a rock slip at Sheps Hollow near Swanage, Dorset.

A large gap also had to be cordoned off on the coastal path between Seaford Head and Hope Gap in Kent this weekend, the coastguard said.

Public Health England (PHE) has issued a cold weather alert for the whole of England through to Wednesday and urged people to check on frail or older neighbours or relatives, especially those living alone or who have serious illnesses.

Dr Owen Landeg, of PHE, said: “Cold weather isn’t just uncomfortable, it can have a serious impact on health.

“For older people and those with heart and lung problems, it can increase the risks of heart attacks, strokes and chest infections.”