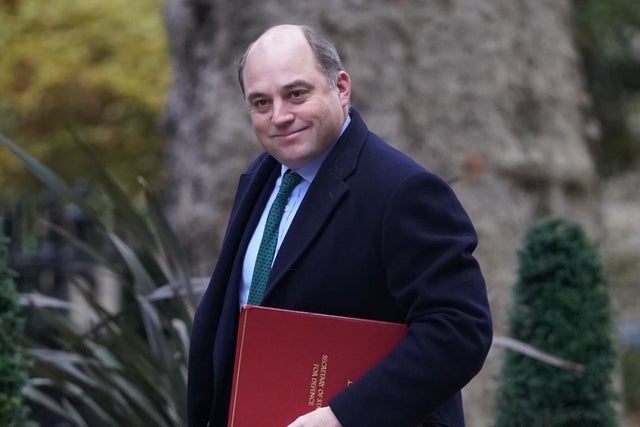 he Defence Secretary has offered Falkland veterans free flights to the islands after the Standard alerted him to a massive hike in fares to pay their respects on the 40th anniversary of the war.

Ben Wallace stepped in after this newspaper learned a six-fold rise in the price of a concessionary ticket on an RAF transport flight meant there would be no veterans on the Falklands to mark the anniversary of the day British troops landed to recapture the islands from Argentine occupation.

Until recently any veteran with the South Atlantic Campaign Medal in 1982 could apply for a seat on a transport plane to the Falklands, provided there was one spare, at a cost of £248.

The scheme was suspended during pandemic. Earlier this year the South Atlantic Medal Association – SAMA – which books the flight was told that the concessionary flight arrangement was starting again.

“We must look after an acknowledge our veterans – who did extraordinary things against the odds,” Mr Wallace told the Standard.

I am determined to put this right, and will try to get the £250 flights restored this summer.

He had asked earlier in the year about flights for veterans on the Falklands 40th anniversary, but only found out from Standard that the price restrictions and lack of flights meant that there would be no veterans flying to the islands in the coming weeks for the anniversary.

“I am determined to put this right, and will try to get the £250 flights restored this summer,” he said.

Mr Wallace said he recognised that the RAF Voyager transports, based on an Airbus 330, are required for support operations for Ukraine. But he said he was sure an aircraft would be available for a special flight for veterans and widows. There is to be a ballot for the free seats.

“We owe a great debt to those who gave their lives in this fight, the defence secretary said.

“I hope the upcoming flight will help pay respect to the fallen.”

Brigadier Ivar Hellberg, who commanded the Commando Logistics Regiment at Ajax Bay, one of the main landing points for British Paras and Marines, said the hiked-up cost “proved prohibitive”.

“I was going to take a small group of veterans down this weekend to unveil a plaque to the dead and wounded at Ajax Bay. We have had to put it off, though the Falklands Government offered to pay for the two badly wounded of our party.”

Both the Defence Secretary and the Evening Standard have been given a bewildering array of explanationscas to why the flights had to be charged at such a high rate.

One was that the Voyager aircraft may have to make a long diversionary flight , should conditions not allow it to land at the Falklands. “Ascension Island is still undergoing repair, and we can’t land at Montevideo, so the plane has to divert back to Dakar in Senegal – it has to carry extra fuel and we have to pay for it,” one desk officer explained.

“This is a pretty strange excuse,” a volunteer at SAMA said. “I doubt if what we could or could not pay would make much of a dent in the RAF budget.”

The veterans association said it has a two and a half year backlog of veterans wanting to return to their former battleground. SAMA reckons it will take five years to clear, by which time most veterans will be in their seventies and many in their eighties.

Tonight veterans who landed at San Carlos in the early hours of May 21, 1982, will meet for a commemorative dinner in Plymouth.

After five battles, living through the onset of the Antarctic winter, they forced the Argentine occupying force to surrender on 14 June. It had cost the lives of 255 British servicemen, two Islanders and 650 Argentines.

“The Falklands War was a vital moment in our national history,” Mr Wallace said. “It is entirely right that we help our veterans commemorate it properly.

“We are currently witnessing another country standing up to an aggressive, illegal invasion , and we should remember that 40 years ago we too did the right thing to protect the sovereignty of the Falkland Islands.”