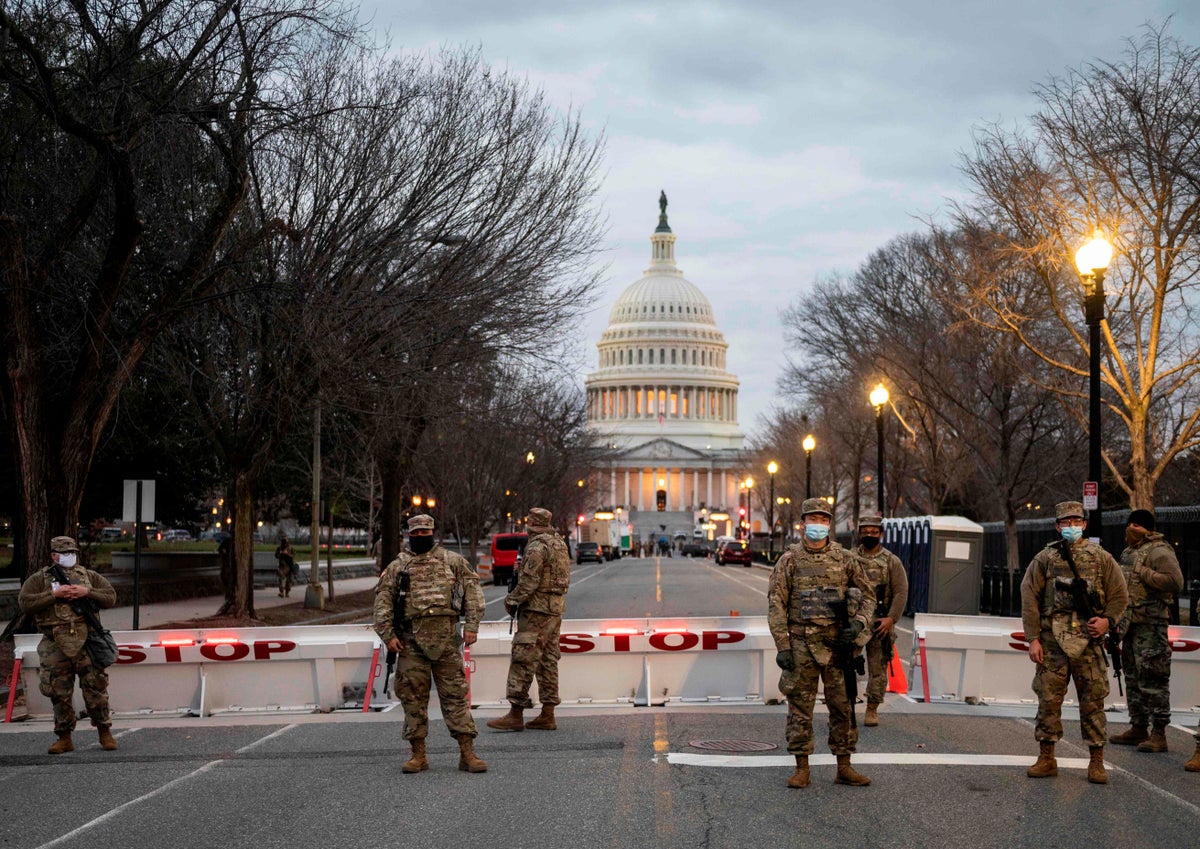 Mr Biden will be sworn in as US  President in person atop a specially built platform. There will be no parade this year, however, and the number of attendees will be reduced.

It has been suggested by figures as diverse as former FBI Director James Comey and former White House advisor Anthony Scaramucci that Mr Biden could pardon Mr Trump in an effort to heal divisions. Previously, Gerald Ford pardoned Richard Nixon following his resignation in the wake of the Watergate scandal.

Meanwhile, Mr Trump reportedly privately debated with advisers whether to take the step of pardoning himself but was warned it would make him look guilty.

Donald Trump is reportedly set to lift coronavirus travel bans on most non-US citizens arriving from the UK, Europe and Brazil.

The restrictions are set to end under a new proclamation from the president, who is due to leave office on Wednesday.

Will Biden’s speech be as memorable as Roosevelt’s?

President-elect Joe Biden will take the stage for his inaugural address at perhaps the most difficult starting point for a president since Franklin Roosevelt began his first term by assuring a nation scarred by the Great Depression that “we have nothing to fear but fear itself.”

But memorable turns of phrase like Roosevelt’s are more the exception than the rule when it comes to inaugural addresses.

Former President Barack Obama in his memoir noted that singer Aretha Franklin’s showy hat and a glitch in Chief Justice John Roberts’ administration of the oath of office got more attention than his speech in the days following the first Black president’s address, delivered as the nation was mired in recession and a growing malaise over two intractable wars.

Now, with the coronavirus raging, unemployment claims soaring and partisan divisions sharpening, Biden faces a fraught moment as he prepares to deliver a speech that aides say he wants to use to “call Americans to unity.”

“The situation he faces is absolutely brutal,” said Cody Keenan, who served as a chief speechwriter for Obama and assisted with his two inaugural addresses. He added that Biden in many ways is “the perfect president for the moment, because he is not hyperbolic, he’s not a bomb thrower, he’s surrounded himself with policy wonks who already have all these plans. I think what we are going to hear him talk about is ‘Here’s where we are, here’s what we have to get done.’ I think that’s going to go a long way just to making people feel better.”

One big problem with the Senate trial

It will give Trump a platform after he has left office

Here’s how the markets are responding to the new president – and why:

FBI running checks on 25,000 guards amid fears of ‘insider attack’

US defense officials say they are worried about an insider attack or other threat from service members involved in securing President-elect Joe Biden’s inauguration.

This has prompted the FBI to run checks on all of the 25,000 National Guard troops coming into Washington for the event.

The massive undertaking underscores fears that some of the people assigned to protect the city over the next several days could present a threat to the incoming president and other VIPs in attendance.

Army Secretary Ryan McCarthy said officials are conscious of the potential threat, and he warned commanders to be on the lookout for any problems within their ranks as the inauguration approaches.

So far, however, he and other leaders say they have seen no evidence of any threats, and officials said the vetting hadn’t flagged any issues that they were aware of.

”We’re continually going through the process, and taking second, third looks at every one of the individuals assigned to this operation,” Mr McCarthy said in an interview after he and other military leaders went through an exhaustive, three-hour security drill in preparation for Wednesday’s inauguration.

He said Guard members are also getting training on how to identify potential insider threats.

About 25,000 members of the National Guard are streaming into Washington from across the country — at least two and a half times the number for previous inaugurals. And while the military routinely reviews service members for extremist connections, the FBI screening is in addition to any previous monitoring.

Multiple officials said the process began as the first Guard troops began deploying to D.C. more than a week ago. And they said it is slated to be complete by Wednesday. Several officials discussed military planning on condition of anonymity.

“The question is, is that all of them? Are there others?” said McCarthy. “We need to be conscious of it and we need to put all of the mechanisms in place to thoroughly vet these men and women who would support any operations like this.”

In a situation like this, FBI vetting would involve running peoples’ names through databases and watchlists maintained by the bureau to see if anything alarming comes up. This could include involvement in prior investigations or terrorism-related concerns, said David Gomez, a former FBI national security supervisor in Seattle.

Migrant caravan makes its way to US days ahead of inauguration

As many as 8,000 migrants, including families with young children, have entered Guatemala since Friday, authorities say, fleeing poverty and lawlessness in a region rocked by the coronavirus pandemic and back-to-back hurricanes in November.

“There’s no food or water, and there are thousands of children, pregnant women, babies, and they don’t want to let us pass,” said a Honduran stuck at the blockade who gave his name only as Pedro.

Guatemalan authorities said late on Sunday they have sent 1,568 migrants back home since Friday, the vast majority to Honduras. Nearly 100 were returned to El Salvador.