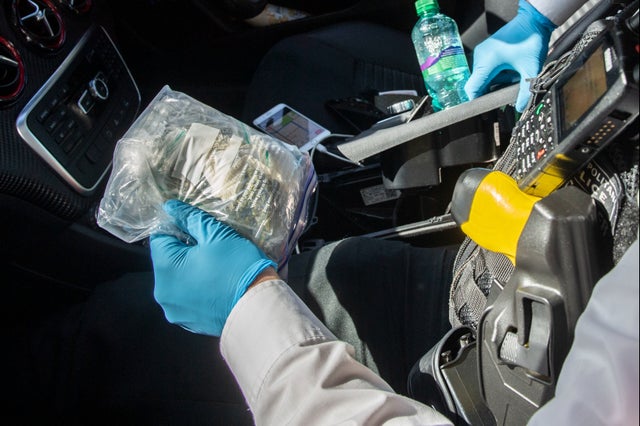 his is the moment a drug dealer freed on licence was arrested within 10 minutes of the Standard joining Met officers on a violent crime blitz.

Laudjah Dufeal, 27, was handcuffed when his Mercedes was pulled over in Islington. In the car’s central console, police found 25 snap bags of cannabis and one of cocaine.

Laudjah, of Hackney, pleaded guilty to supplying Class B drugs and possessing Class A and will be sentenced at Snaresbrook crown court on June 3.

Weeks earlier, he had been released from HMP Ford for similar offences and was being supervised on licence.

Reporters joined Scotland Yard’s Violent Crime Taskforce to mark its fourth anniversary, having made 16,800 arrests in the war against drugs fuelling London’s blade epidemic. More than 3,100 knives, 700 firearms and 21,000 items including drugs have been seized since April 2018.

Despite the crackdown, 2021 was the bloodiest year on record for teenage homicides in the capital as the toll hit 30. At the same time, the Met’s use of stop-and-search has come under scrutiny after Team GB athlete Bianca Williams and MP Dawn Butler claimed they were separately targeted in cars by police because of their race.

Officers are often unaware of a driver’s ethnicity at the time a car is pulled over, our journalists observed.

Police stopped Laudjah’s black Mercedes A250 with tinted windows on April 20 in Donegal Street, close to three schools. The vehicle was registered in Sheffield but insured in Folkestone. Also discovered were a quantity of cash and several mobile phones.

“That starts the alarm bells ringing,” Pc Ben Wolf explained. “Why is it registered so far away from where it’s driving? The occupants couldn’t really account for simple questions around why they were in the area. I could smell some cannabis coming from the car as well.

“Upon doing a name search on the driver, we can see he is well known to police and is currently on licence from prison for drug-dealing.”

Chief Inspector Richard Berns said another team is patrolling Croydon, which is suffering an increase in violent crime and youth murders.

After monitoring feuds erupting on social media, they seized more than 60 knives – including combat weapons and machetes – being carried by suspects on the street, the highest number found in London.

Ch Insp Berns revealed officers have even developed “art and skills” to spot perpetrators concealing blades in their trousers simply by studying their style of walk.

He added: “We don’t have any target other than violence itself.

“Teams are briefed, we give them the right intelligence and put them in the right places – and that’s how they deliver making London as safe as it can be.

“Our work is never done – violence is as old as humanity. But every knife we seize is a potential stabbing or murder that didn’t happen.”

Whilst on duty, the squad have suffered a disproportionate number of assaults with some having teeth knocked out, bones broken and been rammed with stolen vehicles.

He added: “To come across that must be horrific. However, I think that’s their motivation – they want to make a difference and save lives.”

Det Ch Supt Hill does believe the Met could be more open and transparent by further explaining reasons behind some controversial actions.

MPs, community workers and some over-16s are being invited out on “ride alongs” in police cars to see what officers face on shifts. Young Londoners, who were wrongly stopped and searched, come into stations to share their ordeal.

DCS Hill, who insists searches are only ever “done right”, continued: “The young people sit down with my officers and talk through their experiences. It’s a real opportunity for us to understand the person behind the search.

“For the first time, we get the emotion and you can actually put yourself in the shoes of that person.

“Let’s be honest, it can be harrowing for a young person – they could be embarrassed or confused. We’re really conscious of that.

“But a positive interaction could lead to that young person actually applying to become a police officer in the future.”