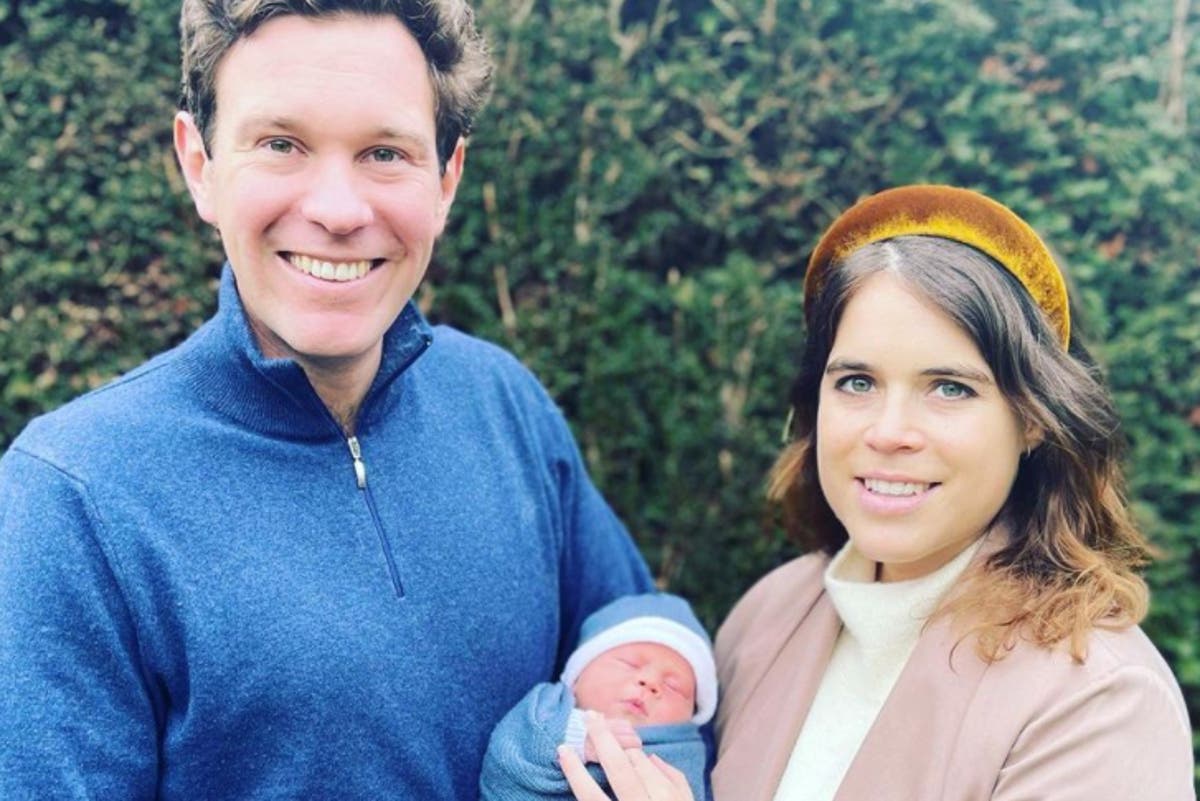 Buckingham Palace released an image of the couple with their baby boy, who was born at the Portland Hospital in central London at 8.55am on February 9.

In the picture, the child is wrapped in blue while being held by his father and clutching his mother’s finger.

The choice of Philip pays tribute to the Duke of Edinburgh, who remains at King Edward VII’s hospital, after being admitted on Tuesday evening after feeling unwell.

Eugenie posted the picture to Instagram with the caption: “We wanted to introduce you to August Philip Hawke Brooksbank.

“Thank you for so many wonderful messages. Our hearts are full of love for this little human, words can’t express.

We are excited to be able to share these photos with you.”

She added that the images were taken “by our wonderful midwife”.

A tweet from the official royal family account said: “The couple have been touched by the well wishes they have received on the birth of their first child, and are delighted to share this first photo as a family.”

Princess Eugenie’s mother Sarah Ferguson said she was “thrilled” by the arrival of her first grandchild.

Writing on Instagram she said: ‘As Grandparents, The Duke and I are thrilled and blessed at the arrival of our grandson August Philip Hawke Brooksbank. He is a beautiful blessing and a bringer of such love and joy to all our Family. I am so proud of Jack and Eugenie, they are and will be wonderful parents.”

Eugenie, 30, and Jack gave the world the first glimpse of baby August on the day he was born, posting a black and white image on Instagram of their hands cradling his tiny fingers and wrist.

On Sunday the Duke and Duchess of Sussex announced they were expecting a second child.

Princess Eugenie’s baby son was born 11th in line to the throne but will move to 12th place once the Sussex’s baby arrives.

August falls after Eugenie and before the Earl of Wessex in the line of succession. Edward, who was third in line when he was born in 1964, is currently in 12th place.

Until the birth of baby Sussex, the first 10 places remain unchanged – the Prince of Wales, the Duke of Cambridge, Prince George, Princess Charlotte, Prince Louis, the Duke of Sussex, Archie Mountbatten-Windsor, the Duke of York, Princess Beatrice and Eugenie.

With so many people ahead of him in line to the throne, August is extremely unlikely ever to become monarch.

He will move down the succession list through the years if the Cambridge and Sussex children have their own families in the future.

Monarchs have very occasionally acceded to the throne from low down the list.

King George I was 52nd in line, but was chosen over at least 50 of his Catholic relatives in 1714 as the nearest Protestant, according to the Act of Settlement.

Eugenie and Jack Brooksbank’s son is not entitled to use an HRH style, nor to have a title.

His father has no title and he has been born down a female line of the royal family, with rules issued by King George V in 1917 limiting royal titles.

He is a regular Master Brooksbank.

Former PM Theresa May has her Covid vaccine, describes jab as ‘effective and painless’

UK coronavirus live: Boris Johnson says he is ‘optimistic’ about lockdown easing but claims Covid is something people will simply ‘have to live with’