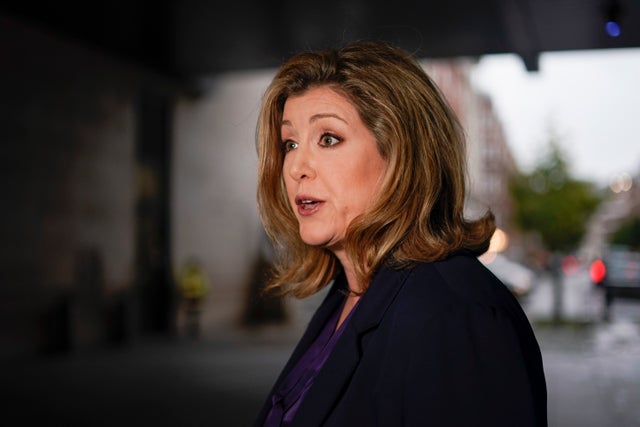 He will be Britain’s first non-white Prime Minister and at the age of 42 the youngest since Lord Liverpool in 1812.

Former Prime Minister Mr Johnson withdrew from the race last night, while Commons Leader Ms Mordaunt dropped out of the race just a few minutes before the nominations for the leadership were due to be announced by the 1922 committee at 2pm.

Her concession, as she failed to get the 100 nominations from Tory MPs required, left Mr Sunak as the only candidate annouced by commitee chairman Sir Graham Brady.

He now has the daunting task of leading the nation through an economic crisis only exacerbated by the chaotic legacy of Ms Truss, who was ousted after only six weeks in office. He was due to address Tory MPs at 2.30pm following his victory.

In a statement posted online two minutes before the deadline, Ms Mordaunt said Mr Sunak now had her “full support”.

“These are unprecedented times. Despite the compressed timetable for the leadership contest it is clear that colleagues feel we need certainty today,” she said.

“They have taken this decision in good faith for the good of the country.

“Members should know that this proposition has been fairly and thoroughly tested by the agreed 1922 process.

“As a result, we have now chosen our next prime minister.”

Home Secretary Grant Shapps stressed that Mr Sunak’s premiership would be based significantly around the 2019 election manifesto, bearing down on inflation, pushing for economic growth and then cutting taxes, while seeking to particularly support the most vulnerable people in Britain.

But one of his most immediate challenges will be seeking to end the civil war which has raged within the Tory party.

“He wants to have a Government of all of the talents,” Mr Shapps told BBC Radio 5 Live.

As it became clearer that Mr Sunak was going to win the race to be Tory leader, and PM, the Pound rose, the cost of Government borrowing fell, and money markets were pricing Bank of England interest rates of around five per cent next year, compared to more than six per cent a few weeks ago.

The optimism appeared short-lived, though, as both the pound and the FTSE 100 later pared back some of their earlier gains.

Mr Sunak will be aiming to reassure the markets by demanding “integrity, professionalism and accountability at every level of the Government” as he seeks to plug a blackhole in the public finances of up to £40 billion.

With Britain heading into a deeper cost-of-living crisis as winter approaches, senior Tory MPs issued a call for party unity.

Justice Secretary Brandon Lewis tweeted: “We have an opportunity to reunite and rebuild – we must take it. We have a duty to deliver for the British people at a time of economic hardship for so many. That is what we have always done as a Party, and what we must do again.”

However, the bitter splits gnawing away at the Tory Party were still clearly visible.

Former Culture Secretary Nadine Dorries claimed it would “now be impossible to avoid a GE”, while veteran MP Sir Christopher Chope said the Tory party is “ungovernable” and argued that a General Election is “the only answer”.

But other Tory MPs dismissed the call for an election, stressing it would bring more instability, and one looks highly unlikely with the Conservatives trailing Labour by more than 20 points, according to numerous polls.

On the day that he emerged as Britain’s next Prime Minister, Mr Sunak left his west London home, smartly-dressed in a suit and navy tie, shortly after 8am.

By mid-morning he had seen a surge in support from “switchers” from Mr Johnson’s campaign, with more than half the 357 Tory MPs backing him.

Commons Leader Penny Mordaunt, though, was at this stage not giving up, as she sought to get the support of 100 MPs to get onto the ballot paper by 2pm.

But she eventually threw in the towel as more MPs moved to back Mr Sunak.

Earlier, after Mr Johnson withdrew from the Tory contest, both Mr Sunak and Ms Mordaunt praised him as they were stepping up their efforts to woo his backers and unite the party.

Mr Sunak tweeted: “Although he has decided not to run for PM again, I truly hope he continues to contribute to public life at home and abroad.”

Mr Mordaunt said Mr Johnson had put “country before party” by deciding to pull out of the race.

Mr Johnson had returned home from a Caribbean holiday as he plotted a return to No 10 less than two months after being ousted following a series of scandals, but later ruled out standing.

Lagging behind Mr Sunak in declared backers, he said that “you can’t govern effectively unless you have a united party in Parliament”.

His decision to pull came in an extraordinary ten days in British politics which started with the sacking of Chancellor Kwasi Kwarteng, saw Ms Truss quit, and Mr Kwarteng’s successor Jeremy Hunt tearing up his September 23 mini budget.