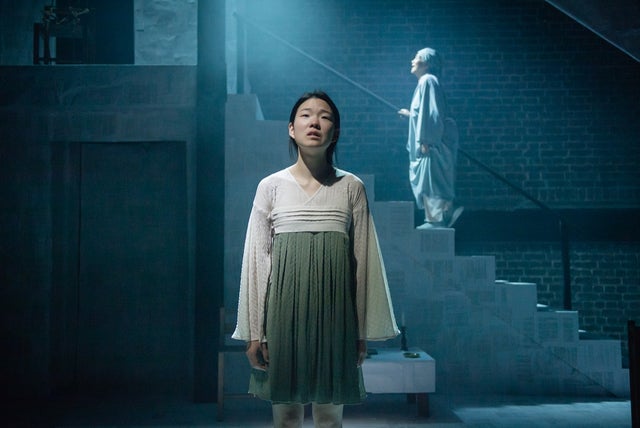 
Review at a glance

he sexual enslavement of so-called “comfort women” across Asia by Japan’s army in World War II is the subject of this hard-hitting play by Kyo Choi, a South Korean writer based in London. Though far from subtle as a piece of drama, it explores this horrific and under-reported slice of history lucidly and well. It also packs more surprises into the second half than anyone would reasonably expect from the clunky first act.

Between 50,000 and 200,000 women are thought to have been kidnapped or coerced, trafficked far from their homelands, and then systematically raped on a daily basis under official Japanese military policy. Those not murdered before the invaders’ surrender were silenced for decades, by a culture of shame at home or by Allied complicity in Japan’s stonewalling denial that anything happened, or that the women “volunteered”. Kyo distills this into a tale of two women taking on the sexist, racist world establishment.

In 1991, Sri Lankan laywer Priyanka Silva (Sharan Phull) begins to investigate the wartime atrocities for the UN, partly prompted by personal reasons that are sketched in later. Kim Sun-Hee (Sarah Lam) is the only formerly enslaved woman who will speak to her. In a parallel narrative elderly Han Min (Kwong Loke), who married the pregnant Sun-Hee on liberation, bickers with his westernised flight-attendant daughter Han Yuna (Minhee Yeo). I thought I’d got the plot revelations pretty much worked out from here: I was wrong.

Kyo supplies a lot of background detail and big ideas. American GI’s themselves abused women in a Tokyo “comfort station” into 1946, well after VJ Day. Violence against women and girls wasn’t formally part of the UN Human Rights Mandate until 1994, apparently. Violent misogyny remains an unspoken part of how nations wage both war and peace, she suggests. American guilt about dropping atomic bombs on Japan robbed them of the moral high ground, too.

But the early dialogue is full of thudding exposition, much of it sparked by Priyanka’s nemesis, the absurdly caricatured US diplomat Jock Taylor (Ross Armstrong). This drawling loon could barely be more patronising if he pointed finger guns at Priyanka and called her “little lady”. Emotion is shoehorned into the plot through manufactured arguments, which makes it all the more surprising when a genuine bombshell comes along.

The play was developed by New Earth Theatre, which exists to promote British East and South East Asian artists, and acts as co-producer here with the Arcola and North Wall. It unfolds in short scenes, briskly directed by North Wall’s Ria Parry on a set papered by designer TK Hay with documents: bureaucracy and realpolitik stopped these women getting justice, and in a scene set in 2018 Priyanka says she stopped working with the UN because it involved “too much white tape”.

It’s slightly jarring that Sun-Hee’s younger incarnation (Jessie Baek) speaks fluent received pronunciation, while the older characters use stilted English. But whatever the flaws in execution, this is a story that needs to be told, as uncomfortable as it is to hear.