Brits are braced for another scorcher on Saturday with thousands more people expected to flock to beaches after the UK’s hottest August day in 17 years.

Forecasters have warned that more records could be broken this weekend with unprecedented overnight temperatures possible in parts of the UK.

London and the South East have endured sweltering heat over the past few days, with no let-up expected until the middle of next week.

On Friday the mercury hit 36.4C at Heathrow and Kew Gardens and on Saturday temperatures are again set to peak at 36C.

The current record maximum temperature for the UK is 38.7C, reached in Cambridge Botanic Garden on July 25 last year.

By Friday afternoon, Bournemouth, Christchurch and Poole Council’s beach check app showed 19 of its 24 beaches under red alert, warning people to avoid the areas because safe social distancing was not possible.

Many more people are expected to make the journey this weekend.

The Met Office has warned more records could be matched or even toppled in the coming days with some very hot and sticky nights on the way.

Temperatures in parts of south-east England will remain above 20C, potentially matching the record of 23.9C which was set in Brighton on August 3, 1990.

The Met Office has issued a level three heat-health warning for the South and South East, meaning the public should look out for others, particularly the elderly, children and people in poor health.

Ishani Kar-Purkayastha, consultant in public health at Public Health England, said: “This summer, many of us are spending more time at home due to Covid-19.


“A lot of homes can overheat, so it’s important we continue to check on older people and those with underlying health conditions, particularly if they’re living alone and may be socially isolated.”

But dark clouds are gathering on the horizon.

Dan Harris, Met Office deputy chief meteorologist, said thunderstorms are on the way, with some places likely to be hit with up to 80mm of rain in just a few hours.

“We’ve issued a broad thunderstorm warning for Monday and Tuesday for all parts of the UK, since although the ingredients are there, it’s just too early to pinpoint the details of exactly where and when thunderstorms will occur,” he said.

“As such, we will be monitoring the developing signals closely and I urge people to keep a close eye on Met Office warnings and forecasts over the coming days. 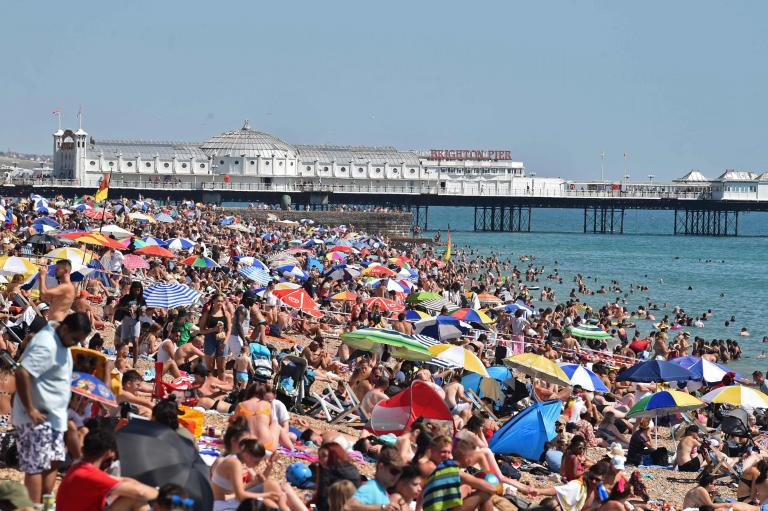